With the move to the intersection of Mill Lane and Butt Lane, I parked next to the entrance of Slindon College to seek the new site of the stone, rather excited by the prospect of its first appearance ‘up’, with the prospect of starting to convey more sculptural energy.

Walking along Butt Lane, one could contemplate the past landscape – views to Nore Hill and Folly are now largely gone because of the post-1800s obscuring wooded belt to the west of the track, just as Slindon House is now all but separated from its northern landscape unless you are in the cupola. But with morning light lighting up glimpses of one face of the Folly, it was evident that one vista might have lined up on the Mill mount formerly high up on my right. I wondered if the dates made that possible? The Mill (mentioned here) was present on the 1723 then 1783 maps but seemingly gone by the 1805 surveyor’s drawing. The Folly was built in 1817, quashing the possibility… but the Mound would still have been an important landscape form.

This may be the last date for a welly-wearing strategy to operate, but another day was thus kept fine and dry. My first thoughts on seeing the stone upright are recorded here; one can see that if emergent imagery does not support our ‘Rise of Northwood’ theme, it must change or go:

Participants today were generally from further afield than those at the Park Pale. As well as those from Slindon, there were walkers and cyclists from Walberton, North Bersted, Bognor, Chichester, Brighton, London, Wiltshire, France… and someone fresh off a morning flight from South Sudan. A group of thirty passed by in the early afternoon; the local Ramblers’ who were partnering a group with visual impairments. Long discussions ensued, and it was noticeable that other senses are enhanced where sight may be reduced, from the adept handlings of mallet and chisel displayed. I wish we could have had longer before their walk recommenced.

See you here again on 31st May! 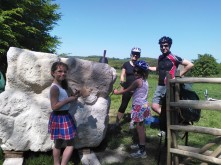 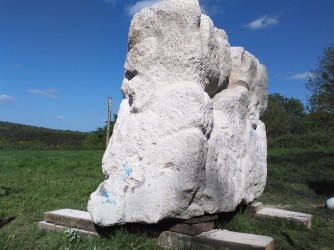