A cloud of goldfinches dived over the Bignor Hill thistletops as I set out along the Roman Road for Six Ways. The stone nestled next to the biggest beech in what was the centre edge of Northwood before the ownership boundaries forced ‘Eartham’ onto the scene. Six ways are in fact now eight… two subsidiaries leave slightly further from the main intersection.

The light was very different for working the stone, but helpful too as in 100 years the visible form might have to cope with similar conditions in its final resting place.
A quiet day – odd how some lone adult walkers passed by without a word or a look. More understandable that the passing groups of young Duke of Edinburgh Award students did not enquire what was happening at this slightly surreal scene with lone sculptor. I did not ‘outreach’ other than the end of the day (when I had a family chatting with me), but it was serendipitous then to find that their school sits close to a site where, in two years time, a huge new stone will begin – influenced by the process now happening with the National Trust at Slindon.

Only ten people worked the stone today with a Yapton family showing real dedication to their apprentice roles. A few saunters found remains below a raptor’s perch; the first Chanterelles of my season; the fenced coppice coupe which perhaps harbours dormice; a lost poppadum on the Roman road. The time to resolve the complicated forms was welcomed; the hard part has now begun. 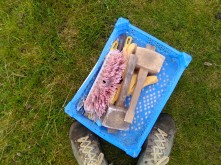 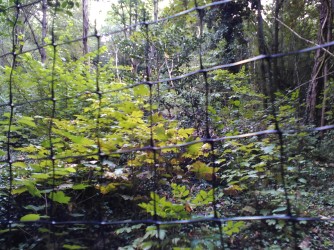 The following day my kids went to the Roman Villa and a fine display of fighting skills from those who spiritually might once have passed through North Wood heading for the Villa, just as the DofE hikers wished for rest and sustenance at Gumber.