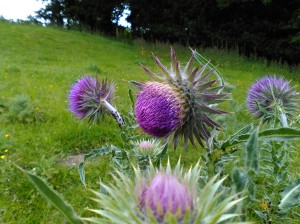 After pausing while the bike racers me passed up on the Downs, I arrived through the thistle heads to a quiet morning with few passers-by. The overnighters had already left the bunk barn.

The sculpture can only grow if one liberates mass hidden in the rock. In order to do that, visions on the surface become obliterated – three forms cannot lie together and take on a three-dimensional aspect – one at least must be sacrificed to allow space and depth for the others to ‘come forward’. One can only promote by removal, in reductive working.

The snail from day 15 became the cut end of a branch today. One corner of the stone is looking decidedly trunk-like.

The cyclists, walkers and naturalists started arriving; one particularly characterful sculptural object was Bungle: part-Newfoundland, part-St.Bernard, appreciating a rest from walking on a warm day. Participating sculptors included the passing Steyning Ramblers and those from Barnham, Ashington, Worthing and Pagham. 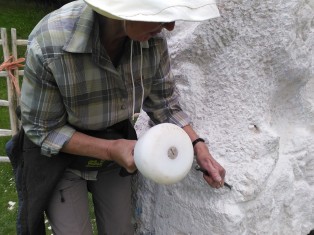 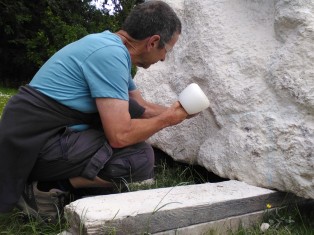 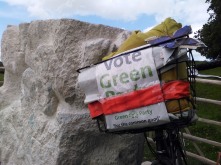 ‘Walked back to Bignor at the end of the day through the timber stacks of a managed beech woodland, after passing the blue Linseed field starting to flower. See you on 4th July – our last carving day at peaceful Gumber. Note the dates through to December are now ready for you to diary: see here!